Bitcoin (BTC) price today lit up, racking 5.78 percent to a daily high of $9,398 before pulling back to stabilize in the region of $9,400. The strong upside movement lifted the top-ranking digital asset of CoinMarketCap through the resistance range of $8,800-$8,930.

Since the halving day correction lowered the price to $8,122, the price of Bitcoin has recovered 14.48 percent, causing traders to now to aim for $9,200 to act as help. 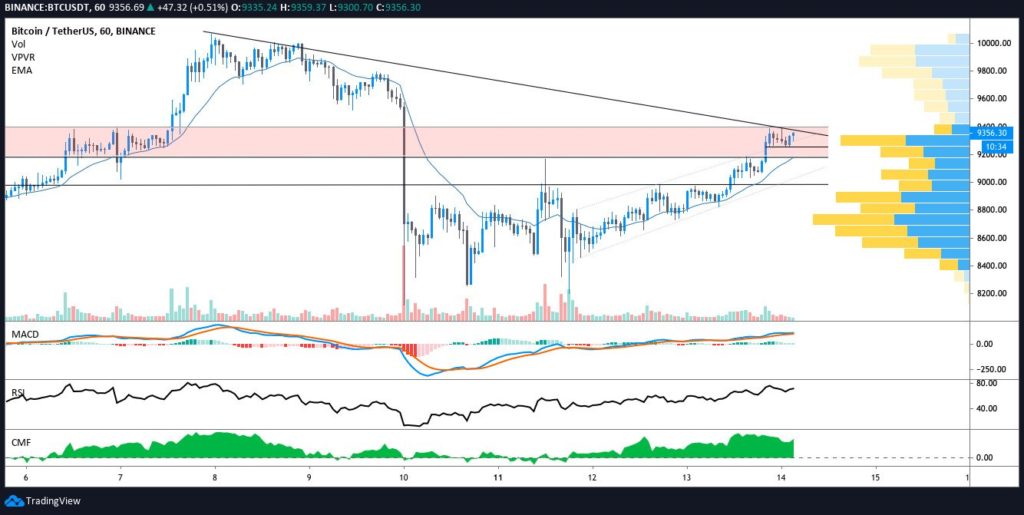 Bitcoin price appears to be forming a bull flag in the hourly time frame as the flagpole was formed on a high volume spike. And the new consolidation is followed by a rising volume of trade.

In the next few hours, the price looks like it will start to stabilize.  The downward trendline from the high May 7 at $10,070 remains overhead. And the price met with resistance at the trendline twice during today’s session.

Today’s rally also brought the price above the ascending channel. And the price has found support along the top of the channel throughout the day.

Confidence among investors continues to improve

The rapid 14.48 percent recovery from $8,122 for Bitcoin was followed by a dramatic decline in the implied volatility of the digital asset.

The drop in implied volatility, according to Cointelegraph contributor Marcel Pechman. Simply illustrates a scenario in which “traders anticipated that the price would either rally or dump during and after the event, thus the short-term spike.”

Implied volatility reaching peak levels means options markets premiums spiked. This should be interpreted as the market charging higher for insurance. And it goes both ways for calls (bullish) and puts (bearish) options.

Now that the halving has passed volatility witnessed on March 11 could decline. But that doesn’t mean a fast drop off to recent lows.

On the other hand, rising purchasing amounts could signal an impending spike. That’ll allow the price to break out of the $9,400 pennant and beyond the resistance.