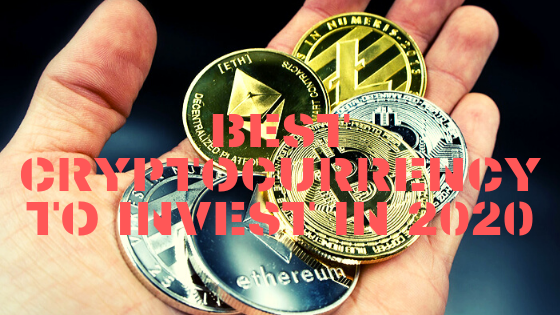 As 2019 comes to an end, deciding the best cryptocurrency to invest in 2020 is the first and foremost thing that strikes our minds. Isn’t it? So, how you are going to decide on this. Let us help you by bringing an analysis of the leading cryptocurrencies rated by adoption, technology, investment reward, and risk. Undoubtedly, history will be unkind to those who knew about crypto investments early but did nothing except watching silently. In addition to that, history will surely be unkind to those who aren’t willing to adapt. Even not willing to embrace cryptocurrencies and blockchain in general.

Most Popular Cryptocurrencies to Invest in 2020

The desire to look into the future and find out which cryptocurrencies will shoot or at least will not disappear is quite natural for an experienced trader. Although forecasting in cryptocurrency is an ungrateful job, we will try to determine the best cryptocurrencies to invest in the next year for you.

Don’t ignore Bitcoin; not now; not in the future! Bitcoin investment is undoubtedly the best long-term cryptocurrency investment to make in 2020. Despite the falling price, Bitcoin is still the most secure cryptocurrency to invest now, and the whole crypto market moves in its parallel. Moreover, bitcoin’s technical competence with Segwit, MAST, Schnorr signatures, MimbleWimble, Confidential Transactions, Bulletproofs, Sidechains, Drivechains, Lightning Network is growing each day making it further hard for any other cryptocurrency to catch up.

Buying Bitcoin from any popular cryptocurrency exchange available is easy. And a wide range of Web, as well as hardware wallets for Bitcoin, are available for storing your BTC safely. Bitcoin is also the first decentralized cryptocurrency, which is the most trusted and adopted cryptocurrency so far. Some investors see it as a store of value.  Bitcoin scores “Good” in overall rating and an “Excellent” in rating for technology/adoption. It should come as no surprise that bitcoin is in first place with BTC being the most established and trusted cryptocurrency at this time.

Companies like Expedia, Microsoft, Subway, Virgin Galactic and Lamborghini all accept bitcoin today. There are also a lot of online retailers available today that accept cryptocurrencies in their stores. Fiat-based exchanges also play a big role with every fiat-based exchange offering Bitcoin as a purchase option for investors.

Ethereum: The Best Cryptocurrency to Invest after BTC

Ethereum comes in second place for adoption with a Good overall rating. It also has an excellent rating for adoption/tech, the same as Bitcoin. Another thing to note with Ethereum is that the world is building on it and it has the most prominent developer’s pool in the world. However, it is very much behind in its schedule and is facing severe scaling as well as governance problems. But it will bounce back smoothly.

Although the Ethereum project has slowed in recent months and is not so common in news headlines, users still believe in an inevitable increase in its cost to $200 per coin. Unlike Bitcoin, Ethereum uses practical smart contracts which are the basis of many projects and the digitalization of transactions and workflow. Its value may increase due to increasing demand for the service, and not the scarcity of the asset like BTC. A large role in the success or failure of the broadcast will depend on the upcoming fork updates and the early implementation of the proof-of-stake algorithm.

In terms of adoption, Ethereum is the first and most preferred DApp development platform. Around 72,422 people are using Ethereum based DApps to date. Decentralized exchanges make up more than half of the Ethereum DApp transaction volume with gambling DApps coming in second. Gamers are the most active Ethereum DApp users, making up over 40% of Ethereum’s daily DApp user base.

NEO: Most Promising Cryptocurrency to Invest

Two names always pop in our minds when we talk about blockchain and innovation – Da Hongei and Vitalik Buterin. The former as we know is the creator of the NEO coin, wherein the latter is the creator of Ethereum. The NEO technology is underpinned by a Delegated Byzantine Fault Tolerant System, which adds sophistication to the system. Its improved proof-of-stake tech makes it one of the best cryptocurrencies to invest in 2020.

Investment is a risky process so it shouldn’t be rushed. You should always reasonably take investment decisions. The NEO Price for today is $8.96. Its current circulating supply is NEO 70,538,831 with a market cap of $631,796,615. The NEO project is often mentioned in ratings for the next year and for good reason. This cryptocurrency breaks many stereotypes of cryptocurrency, including being the first open-source product from China to transform a traditional financial system by combining digital and real assets.

The original superconduct trading mechanism allows users to trust funds through a decentralized platform. That is, its practical applicability is not in doubt, as is the rapid growth of interest. There was also room for smart contracts. By the way, the developers are looking forward to a dialogue with the Chinese authorities, which are negative about cryptocurrencies. NEO may even conduct an ICO, but so far it has been trading fairly stable at $9 per token.

XRP by Ripple is also called the “King of Banking Infrastructure”. The successful conclusion of contracts with the largest financial market players has allowed us to talk about the Ripple ecosystem as a local breakthrough in the crypto industry. The cherry on the cake was the integration with Western Union and the potential replacement of SWIFT to speed up and reduce the cost of transferring significant amounts between contractors.

However, you shouldn’t expect excess profits from XRP. Even in the event of absolute success, it is unlikely that its price will rise above $0.7 in the next couple of years. Though part of the crypto community doesn’t like Ripple, this is one of the few really working projects in the crypto space.

XRP by Ripple Labs comes with an excellent rating for adoption. It is as safe an investment as Ethereum and slightly more risky than Bitcoin. XRP has proven very profitable for early investors. When it comes to adoption, Ripple $30 million worth of shares in MoneyGram, with the chance to buy another $20 million over the next two years. As part of the deal, MoneyGram will use XRP through Ripples xRapid product to transfer money across the globe in seconds and at close to no cost. Along with the MoneyGram deal Ripple is also partnered with other 200 banks, startups and payment companies which include the likes of Santander, Barclays & HSBC.

Litecoin wins the overall Good rating for technology and adoption. It was forked from the Bitcoin source code and was built to offer faster transaction time and lower transaction costs than Bitcoin itself. In regards to adoption, Litecoin has partnered with Tavala(dot)com, a blockchain-based hotel booking platform. As part of the deal, users can reduce their hotel booking costs by 40% if they pay with Litecoin. Seeing as Travala boasts a portfolio of nearly 600,000 properties in hundreds of countries, this partnership could have a considerable impact on Litecoin’s adoption.

The recently surviving halving Litecoin has not yet received the honorary title of Digital Silver, but you can’t say anything about it. Its common code with BTC automatically makes LTC an attractive asset as well as technological superiority in making payments in the real world. Thanks to the Lightning Network, LTC will become interchangeable with Bitcoins. While LTC is trading at $42.65 per coins today, it could well take the $200 mark by end of 2020. Over the third-fourth of all coins will be mined in the next year, which creates an asset shortage and automatically hints at a rapid increase in value.

Confused Which Cryptocurrency to Invest in Now?

Remember, cryptocurrency investments don’t depend on your country or geography. So, it doesn’t matter where you are. Thus, feel free to invest in these cryptocurrencies. Lastly, you should have good wallets to keep your funds safe. So, don’t forget to get the safest crypto wallet installed before getting ready to invest in cryptocurrencies.

Now tell us which ones are your favorite or which cryptos are you picking up for 2020 investments? Are you willing to add additional cryptocurrencies to this list? Do let us know in the comment section below!

Wishing you all a Happy New Year and lots of Crypto Earnings! Cheers!!!